If you want to have an areal overview of the Art Safiental biennale while spending a nice time in this wonderful region, do not miss Art Safiental croquet (edition 2018), an exciting activity and a must see attraction for everyone.

In an area of four to seven meters, visitors can admire and interact with fifteen small scale models representing the installations showcased at this year’s biennale. A clay river runs through the themed croquet game and it is fascinating to visualise in one glimpse the position of the artworks currently transforming the valley of Safiental. Starting from the south end of the valley, players experience a unique parcours which brings in one location a variety of sites, grounds and altitudes.

For garden lovers, the themed croquet game is beautifully inserted within a grass patch on which grows freely a local variety of weeds and wild flowers.

The player with the fewest blows or finishing on the number of blows agreed upon, wins. 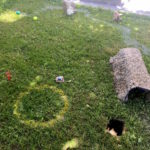 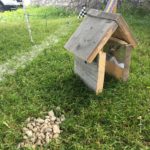 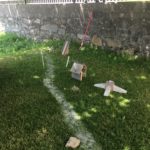 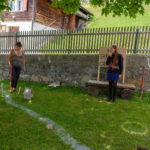 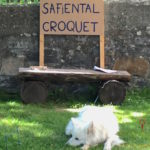 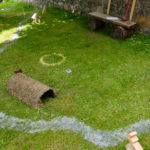 Croquet is a game played on a lawn, in which  a round ball is struck with a mallet through an arch. This ancestral game was introduced to Britain from France during the 1630–1685 reign of Charles II of England. Played under the name of paille-maille, which derivated from the Latin words for ‘ball and mallet’, it took England by storm in the 1860s and then spread overseas. (reference: 9th edition of Encyclopædia Britannica 1877)