On the last day of September 2020, the second of a series of expeditions was held at Stelli in Safiental.

Before the start of daybreak, a temporary installation was brought up into the snowy landscape and set up between the two primary mountain lakes.

As has been aimed for in the first expedition, executed on Glattalp in July 2020, the goal of the sequal was to melt holes into two astral plates, by means of a construction of optical lenses attached to third arms. The expedition was succesful – in the course of 7 hours five drops of the byproduct of petrol fell into the simultaneously melting snow. However the mission had to be cancelled prematurely due to AMS (altitude mountain sickness) and an increasing paranoia about ultraviolet keratitis (snow blindness) of the single remaining member of the crew.

Prints on wall / remains of installation 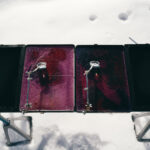 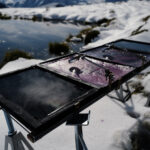 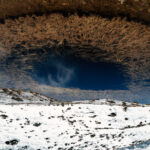 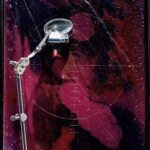 Anna Wiget (*1983 Berlin/Basel) is a visual artist working on narratives about an intuitive understanding of astrophysical research and mathematics. She works conceptually, with installation, drawing and poetry. After her BA in fine Arts at ZHDK Zürich, she did group and solos shows centering around narratives about human and machine identities. Currently she is working on her masters at the Institute for Art in Context at UDK. Her latest projects are part of the LAO observatory, which attempts to connect art, science and philosophy through alternative ways of knowledge creation.
http://lapuneet.com