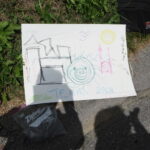 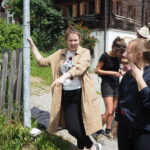 Climate change, and other broad global trends, are difficult to experience viscerally and aesthetically. Site-based interventions, such as those recently installed around Tenna, are one way to explore and contemplate complex changes across the landscape. This interactive performance outlined a long-term, site-based work proposed for slopes near Tenna exploring way to better understand and know the visual  aspects of climate change, loss (especially of glaciers), and changes in the landscape (such as trees growing into natural and agricultural, alpine fields.  This work centres on building three, small exclosures with cabinets holding measuring instruments, at roughly 1500, 1750, and 2000 metres elevation, with views of the remains of the melting glaciers to the north. Over time and as the glaciers disappear, the climate will warm sufficiently to support small orchards of local varieties of apple / pear, hazelnut, and possibly cherry – but these new trees will effectively be ‘bitter fruit’ in the broader losses and chaos. The measuring instruments in  each cabinet will represent the mountain measuring  technologies of different eras: in the lowest cabinet will be kept analog devices from the nineteenth to mid-twentieth century; in the middle cabinet would be the digital devices from the late twentieth century and well into the twenty-first century; and the highest cabinet, where the small orchards would establish as the  glaciers had largely disappeared would be the new measuring technologies from the mid-twenty-first century.

Above Tenna, there are view of three peaks with rapidly disappearing glaciers: Ringelspitz with the remnants of the “Tamins Glacier” and the remaining parts of the south-facing edges of the glaciers on Bifertenstock and Cavistrau peaks all in the Swiss Tectonic Arena Sardona World Heritage Site.

This performance appropriates and sometimes two sets of practices as part of public art production and installation:

A humorous element was inserted into the first half of the performance, that included the PowerPoint, where theoretician and teacher Dr. Hannah Hölling was asked to randomly interject the kinds of hostile comments that can never be verbalized in such a ‘presentation to a jury’ in typical, public art frameworks in North America. As arranged, she heckled and contradicted Brochu-Ingram and went as far as shouting ‘this is shit!’.

The workshop outside by the traditional grazing exclosure was a bit vague and focused on  making notes on two, large sheets of paper: noting key experiences and concerns on the slope above Tenna, at the present time, and imaging that same landscape in fifty year under the onslaught to warming and increasingly extreme and erratic weather.